Cleaning up the trash on Mount Everest 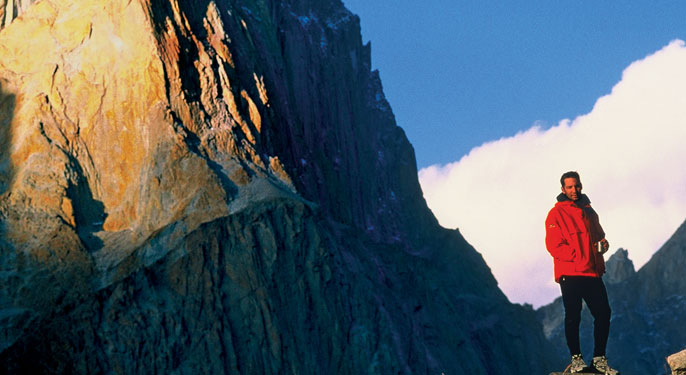 Mountain climber was so horrified to see Mount Everest covered with garbage, he decided to clean it up

SEATTLE — At the top of the world, where the jagged peaks and snow-covered slopes of Mount Everest hug even the highest of clouds, garbage besets the brilliance. Empty oxygen bottles. Shredded nylon tents. Solid waste from decades of climbing expeditions once spoiled the long haul up, rendering the world’s tallest mountain a giant junkyard in the sky.

Brent Bishop, ’93, grew up in a climbing family and knew Mount Everest was dirty. At 27 years old, he was determined to do something about it.

“It was a real symbol,” Bishop says. “If we can’t keep the highest mountain in the world clean, what hope is there for other areas?”

Bishop’s M.B.A. program at the University of Washington tackled cutting-edge environmental management issues and inspired him to create the Buy Back Program, which pays Sherpas—local climbers employed by mountaineering expeditions as guides—a few extra dollars to bring used oxygen bottles and other trash down the mountain to Base Camp.

Whereas earlier attempts to clean Everest’s highest camps had cost a fortune, the Buy Back Program was practical and put the onus on individual expeditions to participate. Using this technique for the first time in 1994, Bishop’s five-man crew removed more than 5,000 pounds of rubbish.

“Other teams started adopting this practice as well, and the collective consciousness on the mountain began to change,” says Bishop, now 43. “It really showed you can be a very focused and dedicated climber—and be an environmentalist at the same time.”

One of America’s most accomplished climbers and half of the country’s first father-and-son team to both summit Mount Everest (his father summited in 1963), Bishop has contributed to cleanup efforts throughout the Himalayas. But his pioneering work on Mount Everest has garnered international acclaim.

Each member of the ’94 team, including the late Scott Fischer, who died tragically on the mountain in 1996, was presented with the David R. Brower Award for environmental achievement by the American Alpine Club. In 2003, Bishop was awarded the Lowell Thomas Medal by The Explorers Club in recognition of his ongoing environmental work.

Today, the Buy Back Program keeps Everest clean. It has been instrumental in removing 25,000 pounds of trash and nearly 1,500 used oxygen bottles from the mountain’s highest camps, including the last camp before the summit—the magnificent South Col at 25,938 feet. It also imbedded in the international climbing community a sense of environmental stewardship.

“If you can make economic incentive and environmental concern work together, then it’s a win-win situation,” says Bishop, who lives in Seattle with his two children—both climbers—and who serves as a business development consultant and motivational speaker.

“I went back to Everest in 2002,” Bishop adds, “and there were no old oxygen bottles left to be brought down. The mountain looks amazing.”