Apologies to NYPD Blue and 90210, but The X-Files was the best show on television for much of the 1990s. We haven’t seen anything like it since.

The X-Files was one of the first shows to carry a storyline over the course of an entire series. Before this it was all one-off episodes of Baywatch and Star Trek: The Next Generation. Storytelling was the backbone of The X-Files, and it changed TV for the better. Here are my top 50 favorite episodes.

The second episode of the series sets the stage for the epic government conspiracy The X-Files is known for. Great story, great acting, and excellent music make this a must-see.

Mulder plays the role of negotiator with an alien abductee who has taken hostages. This edge-of-your-seat episode sets in motion Scully’s main story arc for the entire series. 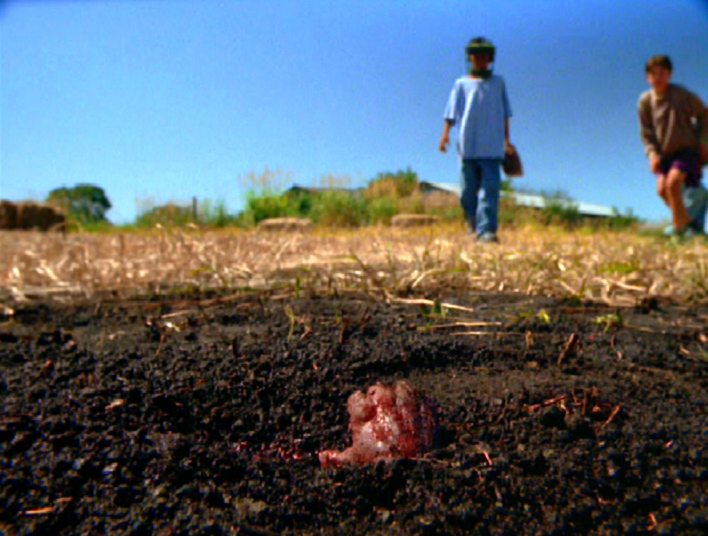 The only episode to get banned from being re-aired on network TV. Mulder and Scully investigate an inbred country family that’s just trying to survive. You can’t un-see this one.

The first of a two-part episode that’s often ranked among fan favorites, Mulder switches places with a “Man in Black” from Area 51. It’s funny and kind of sad at the same time.

The first of a two-part episode that brings to a close the exciting Syndicate story arc. The project’s 50-year conclusion does not end the way they hoped.

The third part of an amazing story, Mulder is offered a job to join the Cigarette Smoking Man, who says he can (and likely does) cure Scully’s cancer as a show of good faith.

7. How the Ghosts Stole Christmas (Season 6)

One of my favorite Monster of the Week episodes. The agents investigate a house that’s haunted by a couple who agreed to a deadly lover’s pact a century before.

An X-Files episode written by Stephen King! I don’t know what more you could ask for. It’s about a little girl’s doll that comes to life and kills people. That’s some scary shit.

The Cancer Man shot both John F. Kennedy and Martin Luther King?! This is a bold episode to say the least, but the story is a perfect fit for one of TV’s most mysterious villains.

Of course The X-Files would do a show on the Loch Ness Monster. A great mix of fun and suspense, we also get more depth on the agents’ budding relationship.

We first meet Gibson Praise, a small boy who is the capstone of the government project to create alien-human hybrids. This story arc sets up a fantastic Season 6.

The agents go undercover as a suburban married couple to catch a demon stalking a quiet gated community. But this perfect little town is not as innocent as it may seem.

Mulder learns he has been set up to believe the greatest hoax of all: that aliens are among us. Even Scully’s cancer was given to her as part of the effort to make Mulder believe.

The first episode following the release of first X-Files movie in 1998. The agents track an alien to a nuclear power plant. It’s scary, wonderful, dramatic, and classic X-Files.

Scully learns she has cancer and the show enters a new level of character development. Gillian Anderson won an Emmy for her work on this episode and the fourth season overall.

A shape shifting janitor pretends to be Mulder and puts the moves on Scully. This episode opens up some interesting conjecture about Mulder and Scully’s real relationship.

Enter John Doggett. The series had lost David Duchovny for awhile, so it was a brilliant move to put the new guy on the hunt for Mulder. That story arc carries the entire season.

The end of the Syndicate story arc does not go according to plan and a host of key characters are killed off. Mulder emerges from the wreckage stronger than ever. 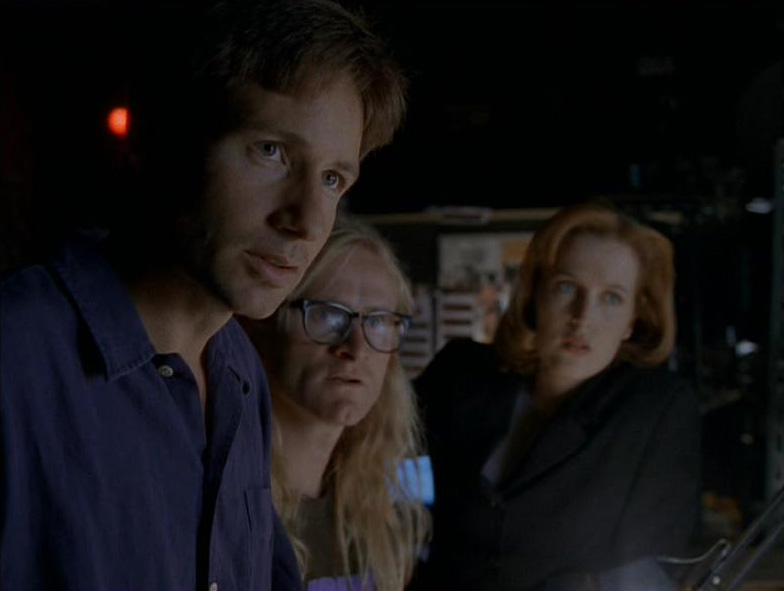 A thrilling conclusion to a three-part story that covers the second season’s finale and third season’s premier. We first learn of the government’s true role in smallpox vaccinations. 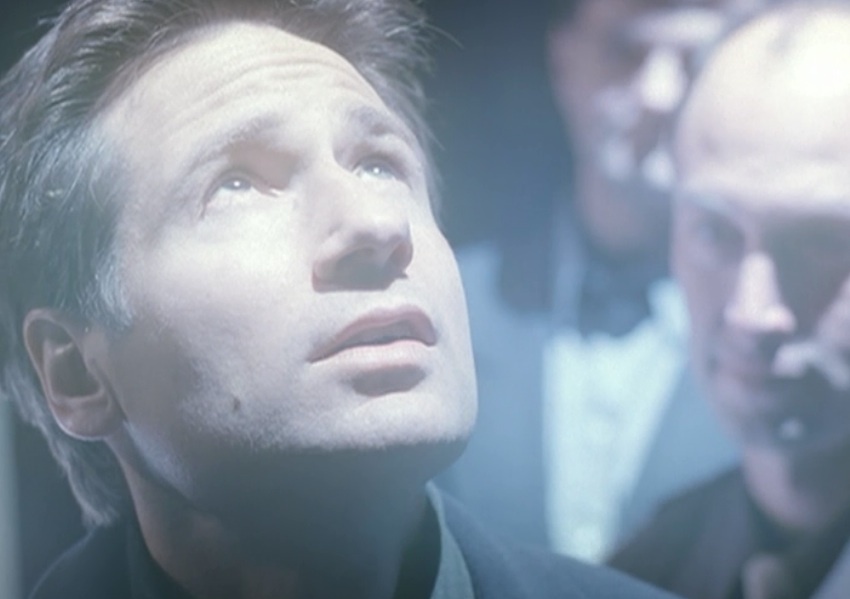 Returning to the scene of their first investigation in 1993, Mulder and Scully look into mass abductions. The last episode before David Duchovny is taken, er, quits

Baseball gets The X-Files treatment and it’s a beautiful thing. We meet an alien stranded on Earth just trying to fit in, playing baseball in the 1950s Negro leagues.

The very best of The X-Files’ “funny” episodes. Mulder and Scully are the subjects of a book about alien abductions. Guest starring Jesse Ventura and Alex Trebek.

The season-long search for Mulder ends, but not the way we had hoped. Scully and Doggett discover Mulder’s body has been returned in the first of a terrific two-part story.

Technology gone berserk! Robots and AI watching our every move, judging us, changing us. All because Mulder doesn’t leave a tip at the restaurant.

One of the show’s scariest episodes. A boy is kidnapped and returns 10 years later without having aged a day. The X-Files rarely gives you nightmares. This is one of ’em.

The best of Season 10’s six-episode run and a classic “funny” episode. Mulder and Scully meet a creature who convinces the agents that humans are the real monsters.

Mulder and Scully track an alien-human hybrid on a secret government train car. The show’s mythology was at its peak this season, and this two-part story was awesome.

Maybe the best-directed episode in the entire series. Mulder boards a boat in the Bermuda Triangle that’s been missing since World War II. This is a fun story from the get-go.

A bright spot in a slow Season 7, this episode was written and directed by Gillian Anderson. It’s a fascinating look at a life Scully could have led had she not joined the FBI.

Scully’s cancer is getting worse, and Mulder is out of options. He fakes his own death so that he can disappear and dig for the truth behind what happened to his partner.

Mulder undergoes hypnosis therapy to learn more details of his sister Samantha’s harrowing abduction when the two were just teenagers—and who was really involved.

One of the series’ most memorable Monster of the Week episodes. Mulder and Scully investigate a series of murders at a traveling circus and freak show.

Ah, the bees. Skinner uncovers the government’s secret plan to use virus-carrying bees to subject the public to tests on the still-developing alien vaccine.

This is as close as The X-Files ever got to The Exorcist. Religious leaders attempt to purge an evil spirit from a boy whose little brother has come back from the dead.

Alex Krycek makes his move, infecting Skinner with a deadly nanovirus that only he can cure. Krycek is a great television bad guy, and he’s in top form here.

A fan favorite and one of The X-Files’ funniest episodes. This is a vampire story told twice from the perspectives of both Mulder and Scully. The two versions aren’t even close.

One of the best villains in series history is a test subject who smokes cigarettes loaded with more than just nicotine. Great acting and a haunting performance overall from Jigsaw himself.

The Lone Gunmen are at it again in their second stand-alone episode. The trio goes undercover at a defense conference in Las Vegas to uncover a plot against the American people.

Killer cockroaches infest a small town, and Mulder meets a scientist named Bambi that he just can’t take his eyes off. Scully says in disbelief: “Her name is Bambi?!”

One of the few episodes to focus exclusively on Assistant Director Skinner. We finally get a chance to learn more about one of the agents’ only true allies.

Scully’s faith is a central theme of The X-Files. In this episode, she realizes Mulder will believe in anything involving little green men but he just can’t believe in God.

Scully and Doggett investigate a series of women who had no way of conceiving but claim to have been abducted and then impregnated with alien babies.

The conspiracy kicks into high gear with the second season’s finale. We begin to learn of the U.S. government’s mysterious and horrific human experiments.

Set in the forests of Washington state, the agents come face to face with a swarm of ancient bugs that can eat a man alive—just as soon as the lights go out.

Scully’s sister is killed in a botched assassination attempt, and a Navajo code talker helps the agents begin to unravel the mystery of alien life on this planet.

A mysterious disease aboard an abandoned Navy ship forces people to age decades in a matter of days. The agents barely make it out alive, as usual.

After being tossed into a Russian prison camp, Mulder is exposed to the Black Oil. Scully covers for him in front a Senate sub-committee. Not a recipe for success.