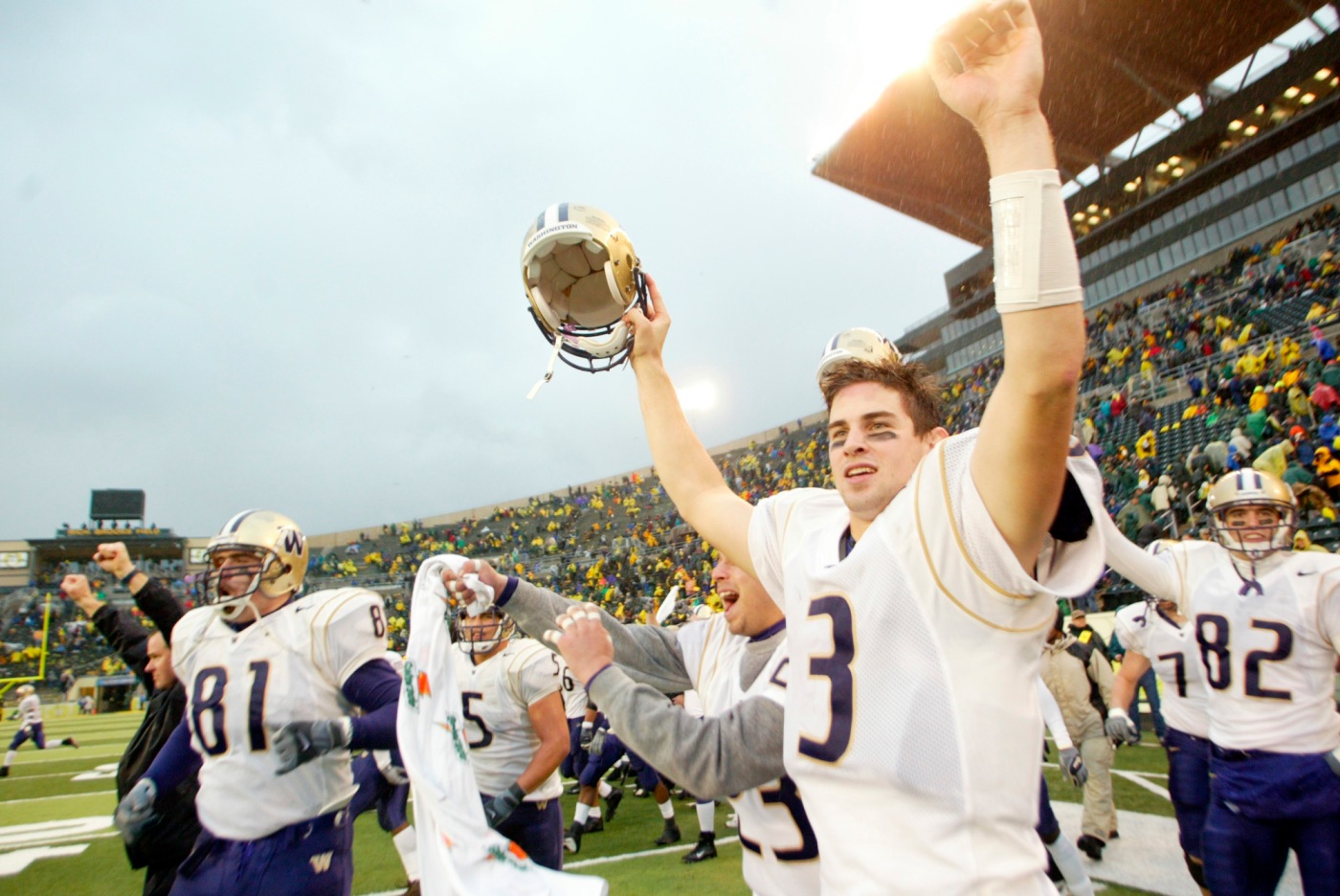 Cody calls his own shots

SEATTLE — Cody Pickett knew exactly what Sports Illustrated wanted when the call came. Surprisingly, he wasn’t that interested in giving it to them.

Pickett isn’t, and probably never will be, a media darling like most of the guys in his position. So there was a good chance the UW senior would be just fine without any of the attention. But this was sports journalism’s top dog on the phone—and they wanted to talk.

In Pickett’s eyes, football isn’t about who can run the fastest or rack up the most yards, it’s about winning. And winning can only be done as a team, which is why he was reluctant to grant Sports Illustrated its feature on the cowboy from Caldwell, Idaho.

Nevertheless, Pickett agreed to do the story in hopes of generating a little publicity for the Huskies’ upcoming season. What he got, however, was yet another reason to distrust the media.

“There’s been a lot of times when somebody has said something that really wasn’t true. And I know they’re just trying to do their jobs, but they can take things way out of context sometimes.”

The quarterback position tends to be the center of attention and the default team spokesman, but that’s not always the case. Pickett has never sugar-coated his feelings about the media in his three years as Washington’s starting quarterback. He’s pretty much kept to himself with the idea that what he does on the field will speak louder than anything he says off the field.

And for a while, it worked. Pickett became the first player in Pac-10 history to eclipse the 4,000-yard mark in a single season by throwing for 4,458 yards and 28 touchdowns last year. But the Huskies finished the season 7-6, leaving many in the media to wonder whether or not Washington’s signal-caller was owning up to his responsibilities.

“I’m not a real rah-rah guy,” Pickett explained. “I try to lead by example because that’s what I’m good at. Off the field, I’m more laid back and loose, but on the field, it’s a different story. Football is a real competitive and serious game, so you have to have your serious side out there.”

This season, Pickett’s numbers have declined as the offense has struggled to find a rhythm. And with the Huskies flirting with the program’s first losing season since 1976, his silence is once again generating some heat.

But that’s just who he is—a quiet and confident 23-year-old who knows how to handle himself. And if that’s not what the media wants, then so be it.

“People think I’m stuck up just because I’m quiet,” said Pickett, “but that’s just my personality. I’ll open up to you once I get to know you, but before that—it’s not being cocky—it’s just that I don’t know you and I don’t know how to react to you.”

Washington players and coaches know that Pickett’s media hush-hush is nothing to worry about. He doesn’t want to be the center of attention, and that’s OK with them. As long as he plays hard and remains dedicated to winning, nothing else is relevant.

“Cody is a stand up guy and a great football player,” said UW coach Keith Gilbertson. “How he is with the media is his own choice, but he’s always the same around his team and his coaches.”

Pickett was first exposed to the media at a very young age by his father, Dee, who was a world-class roper on the professional rodeo circuit for many years. He remembers his father doing interviews with reporters on multiple occasions, and that he always said to be positive when the mic was around.

In high school, Pickett said dealing with local media was more of a thrill than anything else because of the exposure it brought to his team. But at Washington, there’s a lot more pressure on Pickett than before. He knows that if the Huskies don’t perform well, there’s going to be a room full of reporters to answer to instead of just a few stragglers.

“It’s a little more cutthroat nowadays,” said Pickett. “But this is my third year and I’m kind of getting used to it. I try to just relax and say what I feel when I’m with the media. On the other hand, I have to be careful because I can’t talk about everything. I don’t want to make their jobs too easy, you know.

“I also don’t want to get into a Cody versus the media thing—they’re just doing their jobs and I’m just doing mine. But I really don’t go home and think about what I’m going to tell them, and that’s just the way it is.”

Pickett can’t remember getting burned by the media too many times, but admits there’s been several things that have managed to get under his skin. The local papers, for example, ripped into the Huskies following a 28-17 upset loss to Nevada earlier in the year, with one media outlet going so far as to say that Husky football was dead. Most of the team kept quiet in the week following the loss, but Pickett was frustrated and he let everybody know it.

“I definitely got a little animated that week,” said Pickett, “but it was a different kind of week. People didn’t think that we cared and that we weren’t trying to win, but that’s ridiculous. How we feel as a team after a loss is a lot different than how the media sees it. This is what we do—we play Husky football, and it’s pretty much our lives.”

Following this once-in-a-lifetime eruption of emotion, Pickett settled back down and refocused himself on winning games and turning his senior year into a memorable one.

And while it hasn’t turned out the way he planned, Pickett says he’ll continue to go with the flow even it if means more bad publicity.

“I know they’re going to come after me,” Pickett said. “Lately, it’s been because my numbers aren’t as good as last year. But you know what, I don’t care about numbers as long as we win. People might think I’m just saying that, but I’m being completely honest. I really don’t care as long as we win—that is the only thing that matters to me.”

It matters all right, even more than a Sports Illustrated story.