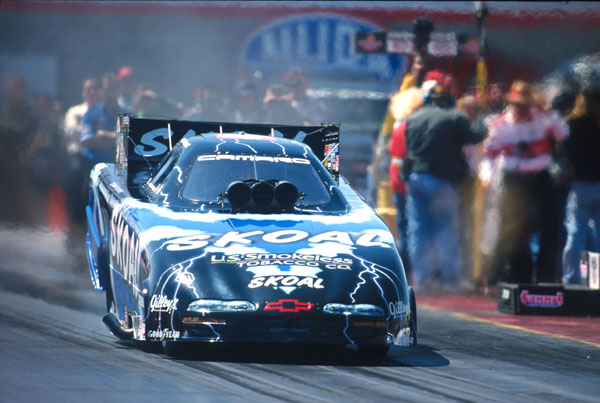 KENT, WASH. — Anticipation mounted as driver Tommy Johnson Jr. and the rest of the Blue Skoal Racing Team prepared to test the engine of their 7,000-horsepower Chevrolet Monte Carlo.

Johnson, a 17-year NHRA veteran, slipped on his helmet while crew members hustled to complete several last-minute touches and strap him securely in place. Fans gathered as crew members backed away. Then Johnson let it rip.

The engine erupted in a blast of power that rocked through the pit area and rolled its way through spectators’ cheap earplugs and cupped hands. Some loved it, some hated it. But everybody felt it.

Those who withstood the muscle couldn’t escape the smell of the exhaust fumes, though, which clogged the throats and watered the eyes of many in attendance. Several fed up fans turned and headed for safety, but Johnson shut it down and brought them back.

Plenty of cheers from satisfied fans filled the pit area as Johnson exited the Funny Car and headed for his air-conditioned trailer. Crew members removed their gas masks and went back to work without a word spoken. Basically, it was business as usual.

Qualifying yesterday marked the beginning of the 17th annual Carquest Auto Parts NHRA Nationals at Pacific Raceways. The three-day event runs through the weekend and culminates Sunday at 11 a.m. with final eliminations.

As the day went on, crew members hustled to get the car ready for qualifying. No one cracked a smile. No one joked around. They were completely focused on the task at hand, and nothing else seemed to matter.

“It’s madness,” said team owner and racing legend Don Prudhomme. “It takes all these people to run just one car. If this were a football team, (the crew) are the linemen. If the line breaks down, the defense is going to beat the hell out of the quarterback. Well, Tommy is our quarterback.”

Mix fuel specialist Kevin Butterfield went back and forth between siphoning gas from the car’s tank and testing its nitromethane level, which gives the car its power but is regulated by the NHRA.

Elsewhere, Brad Morrison lubed the piston racks and turned the engine over, and Nick Blanchette changed the oil.

Everybody worked at their own pace, but they were together in every way. Butterfield checked Morrison’s work, Morrison checked Blanchette’s work, Blanchette checked Butterfield’s work—it was a total team effort.

“One guy doesn’t take the credit,” Morrison said. “When Tommy’s done racing he’ll thank us for giving him a car to run, and we’ll thank the crew chief for making the right calls. Everybody checks over everybody to make things right. It’s a team deal.”

When it was time for Blue Skoal’s first qualifying run, the body was placed over the engine and the car was taxied to the starting line. The crew strapped Johnson securely into his seat and made several last-minute tweaks before locking the body in place.

Johnson’s run lasted 5.233 seconds, which at the time put him in the lead. He finished sixth after the first run, but slipped to 15th after the second.

Johnson’s initial run would have thrilled most racers, but because of the sloppy track caused by a 130-degree surface temperature, Blue Skoal’s time was considerably slower than normal.

The crewmen began preparation for Johnson’s second qualifying run immediately after bringing the car to rest in the pits. They removed the body and stripped the car bare in a matter of minutes. The only part that remained intact was the engine block, and even that got a rubdown.

They checked and rechecked every part for burns, scorches or other signs of trouble. Assured there was nothing wrong, they began the rebuilding process. This time, it took the crew nearly an hour and a half to do so. On race day, it will take them a mere 35 minutes.

As the crew members finished up with the engine, crew chief Mike Green ran several calculations through his head one last time. Green’s job is to tally the data compiled from the previous race and make adjustments for the upcoming one.

This particular race, he was forced to adjust for the slippery track conditions that may have slowed the car down during the first qualifying run.

With 10 races remaining on the schedule, Blue Skoal is ranked 12th in the Funny Car standings, 388 points behind 12-time NHRA champion John Force.

Johnson and company realize time is running out, but hope new rule changes will help level the playing field and give them a shot at finishing in the top 10 for the fourth consecutive season.

The most prevalent rule change, a drop in nitromethane use from 90 to 85 percent, comes in direct response to a June 27 accident in St. Louis that killed driver Darrell Russell. Nitromethane is mixed with alcohol to create the car’s fuel supply and the power it needs to reach 300-plus mph. The rule goes into effect this weekend.

“The good thing is that it will level the playing field a little,” Johnson said, “but I hate anything that slows the car down. I say make them safer, not slower.”